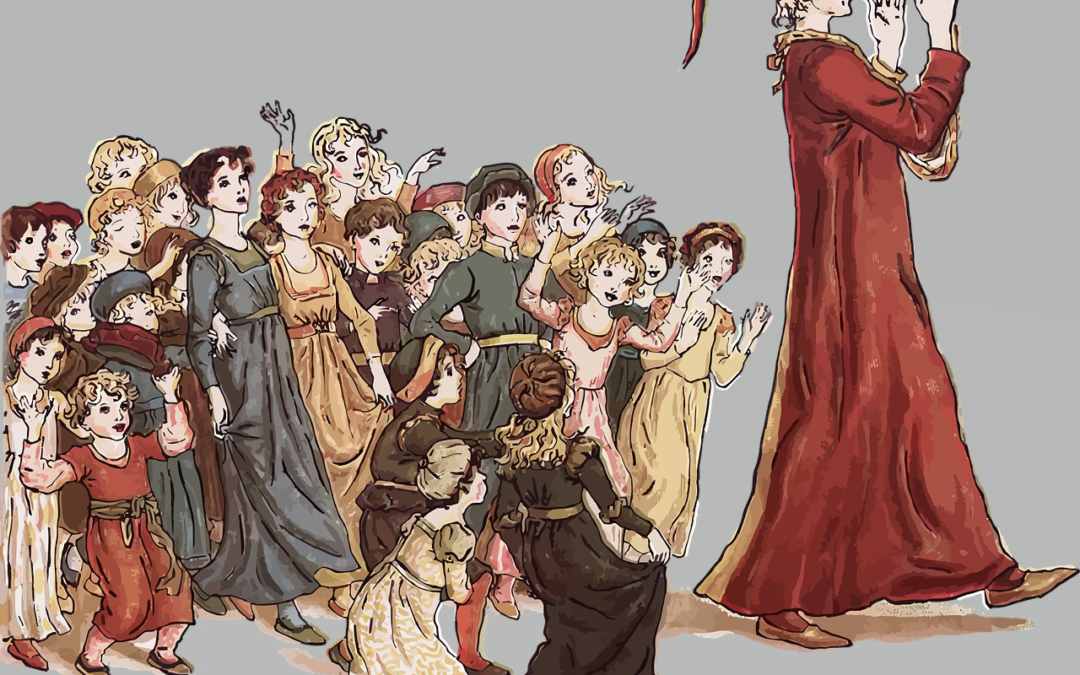 Simon Pease asks – which tune do you dance to?

The story of the pied piper of Hamelin recalls a town’s desperate attempt to rid itself a massive rat infestation.  A mystery piper appears, who, in return for a fee, promises to solve the problem.  He does so by playing a tune and leading the rats away.  However, when the Mayor refuses to pay him, he takes revenge by doing the same thing with the town’s children, all except for three who cannot follow him – one blind, one lame, and one deaf.

We all follow a tune, and are influenced by others, whether for good or bad.  Some tunes are powerfully seductive, but ultimately deadly.

We all follow a tune, and are influenced by others, whether for good or bad.  Some tunes are powerfully seductive, but ultimately deadly.

The changes taking place in the world at large over the last few years have profoundly shaken many people. Deep fault-lines are emerging everywhere to tear communities, family and nations apart. The reasons for these divisions are ethnic, religious, political, generational and between men and women.  “Fake news”, conspiracy theories and even supposedly objective news presenters losing control of their emotions are all the rage these days (pun intended).

In these times of polarisation, we therefore need to ask ourselves whose voice can we trust – which tune should we listen to?  For Christians, the answer is apparently simple.  We follow Jesus, who said that “my sheep listen to my voice”.

Yet Christians themselves are divided like never before, often over the very same issues that vex society at large, such as Brexit.  On the other hand, recent changes in social norms, for example in areas relating to marriage and gender, have forced many Christians to choose between the Bible’s teaching and the current spirit of the age (or “Zeitgeist”).

Being “in the world, but not of it” has meant, in reality, that believers have always faced this choice over which voice to heed.  The Bible speaks plainly, but what of the world?  When it comes to political parties and even the media, it is often relatively easy to discern where people stand on certain issues, although the BBC claims that being criticised for bias by people from opposing camps proves its neutrality!

For many years I listened to the BBC’s “Today” programme (their flagship for quality journalism and political reporting), hoping for informed insight on the pros and cons of EU membership.  However, their coverage was almost entirely restricted to highlighting internal Conservative Party divisions on the issue, thereby dodging the matter until the Brexit referendum forced their hand.

Although strongly suspecting bias within the Corporation, it was not until reading Robin Aitken’s book “Can we trust the BBC?” that I finally understood the facts which explained these impressions.  Aitken even poses the hypothetical scenario of the BBC standing as a political party and suggests what their manifesto pledges would be.  Reading his analysis, I recognised that he had discerned the Corporation’s values with remarkable accuracy, thereby strongly challenging their claim to impartial journalism.

Magicians boast that their performances are based on misdirection, meaning that they deliberately distract people from what is actually taking place right in front on them.  A friend recently told me about the Barcelona Declaration (Union for the Mediterranean), on which the mainstream media is silent.  Its goals, however, explain a great dealconcerning the EU’s political, economic, cultural, militaryand even religious ambitions.

As powerful as the BBC’s (and other media organisations) propaganda may be with regard to news coverage, or silence, on important matters, its greatest influence is possibly exerted in the area of popular entertainment. Why? Because our defences are inclined to be down. Children are particularly targeted as the most impressionable.

Another word for entertainment is “amusement”, meaning the setting aside of reflection and critical thinking – we willingly “suspend disbelief” to enjoy the fantasy.  In amusement land, for example, no-one ever bothers locking their car and women always beat men in hand-to-hand combat – in contrast to previous generations when they would scream helplessly under the slightest pretext and need a man to heroically rescue them! Both representations are of course extreme, demonstrating that social engineering has been with us for a long time.

The UK TV show “It was alright in the 1980s” pokes fun at society’s values from an earlier era, but those who set the current “politically correct” agenda will no doubt themselves be subjected, in turn, to popular ridicule by future generations.

BBC dramas, including the recent “World on Fire”, “The War of the Worlds” and “Summer of Rockets” are invariably heavily loaded with “politically correct” messages.  This creates the strong impression that all script-writers are required within their plot-lines to tick as many agenda-based themes as possible within the constraints of the subject matter.  Yet ideological indoctrination dressed up as entertainment is proving to be tedious.  Even a Radio Times critic described the script for one of these series as “turgid”!

It has been said that people who ignore history are prone to repeat its mistakes.  A young Labour Party parliamentary candidate recently told me that there was nothing wrong with Jeremy Corbyn being a Marxist.  Perhaps he was unaware of the tens of millions of Soviet and Chinese citizens who died at the hands of their own governments’ disastrous attempts at centrally managed economies.

Given the exceptional powers wielded by governments today as a result of the coronavirus, it is surely God’s mercy that the last general election did not deliver this nation into the hands of such an ideology.

The writer George Orwell started his political life as an ardent Communist.  However, the brutal reality of the Soviet Union changed his mind, and he went on to write two of the most powerful satirical novels ever penned – “Animal Farm” and “1984”.  His remarkable insights from many decades ago remain just as powerful today as when he wrote them, including his chilling description of the Ministry of Truth (devoted to government propaganda) and its own corrupt language of “newspeak”.  One of the Ministry’s tasks was re-writing history, but could that happen today?  In “World on Fire”, WW2 British soldiers (unlike those of other nations) are represented mostly as victims of shell-shock, whilst an RAF Battle of Britain pilot describes himself as a murderer.

Although the coronavirus probably does not feature directly in Bible prophecy, the Scriptures do foretell the coming of a powerful leader whose message will be incredibly seductive, but also a dangerous lie.  Many astute commentators have noted how the current global crisis has already prompted many calls for a “global solution”, potentially paving the way for this very scenario.

Shall we then listen to the tune of this age’s pied piper – or to Jesus? In the Hamelin story, the three children were physically unable to follow the piper.  In the same way, Jesus has to break our dependence on this world so that we can follow Him instead.  However, He is also the one who restores us and, in real life heals the lame, the deaf and the blind.  May He open our spiritual eyes and ears to see things from His perspective.

The Tune, by Larry Norman:

Simon Pease is author of the recent book “Ruth – A Prophetic Parable” Sub-titled “How does the story of Ruth relate to YOU today?” He teaches on the unity of Scripture and contributes to the UK magazine Sword.