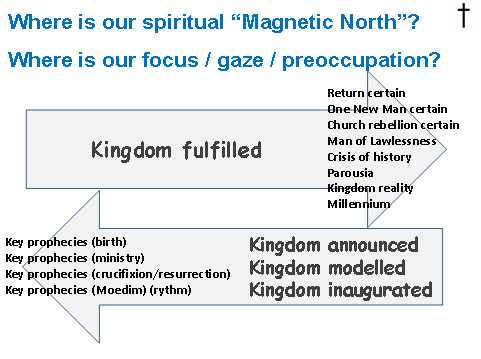 Just where is our focus, as Christians?

And where should our focus be, as Christians?

Peter Sammons considers where our ‘magnetic north’ should be located  – do we spend too much time looking back?

Now if you’re a staunch Republican, or an ant-royalist, you may balk at this good news, because it implies a King and all that goes with the idea of royal prerogative. And of course it implies duties owed to the King (note, not the other way around). Americans in particular talk about being ‘citizens’ of the Kingdom. That’s good, but not quite right! We should really speak about being Subjects in the Kingdom. Whilst we have “rights” as Subjects, in reality they are strictly limited. Interestingly, in modern translations the only reference to a right (and I think it is a reasonable translation) is the right to become children of God (John 1:12). That’s the only right that really matters, and yet its not included in the UN Declaration of Human Rights!

John 1:12 gives us a clue: we are not automatically children of God but we have the (inalienable) right to become one – to become a child of God. That, in turn, suggests we have to do something to realize that right in practice. (Is there something here about adoption? Is the Kingdom God’s eternal adoption agency?)

When Jesus taught, He taught about the Kingdom. And when He preached the good news, it was the good news of The Kingdom (note the definite article there!). Mark relates that, at the beginning of His ministry, “Jesus came to Galilee, preaching the gospel of the kingdom of God” (Mark 1:14). Matthew tells us, “… Jesus began to preach and to say, ‘Repent, for the kingdom of heaven is at hand’ … And Jesus went about all Galilee, teaching in their synagogues, preaching the gospel of the kingdom …” (Matthew 4:17-23).

Luke 8:1 confirms that Messiah Jesus did exactly what He said He would: “Now it came to pass, afterward, that He went through every city and village, preaching and bringing the glad tidings [the gospel, or good news] of the kingdom of God …” This message of the Kingdom was the heart of Messiah’s teaching from the beginning. Together, the Gospels of Matthew, Mark, Luke and John use the term “kingdom of God” in 53 verses. The gospel that Messiah Jesus brought is evidently about this Kingdo

We live in “the world”. We are born to this world. So in a real sense we are children of this world. Yet where the term “world” is used in Scripture, usually it is shorthand for all those things that are diametrically opposed to the purposes of God. We are to be in the world, it is often said, but not of the world. That is a timeless truism! Many Bible verses underscore this point:

Do not be conformed to this world, but be transformed by the renewal of your mind, that by testing you may discern what is the will of God, what is good and acceptable and perfect.

But our citizenship is in heaven, and from it we await a Saviour, the Lord Jesus Christ, who will transform our lowly body to be like his glorious body, by the power that enables him even to subject all things to himself.

You adulterous people! Do you not know that friendship with the world is enmity with God? Therefore whoever wishes to be a friend of the world makes himself an enemy of God.

We know that we are from God, and the whole world lies in the power of the evil one.

In a sense then, we are born to this world and we have a choice to make: do we exercise our right and become Subjects in the Kingdom? Remarkably, however, we are not only Subjects, we are also members of the royal household as we are adopted to the royal family. Even more amazing, Jesus calls us His friends! (John 15:15). I find that truly mind boggling! A friend of Jesus ……. A friend of the Saviour of the World …….

In diagram form we can say that the World and the Kingdom exist side by side. Do we “straddle” them, with one foot in each camp?  Where is our true allegiance? Whilst it is inevitable that we must live out our lives in this world, yet we MUST be Subjects in God’s Kingdom, and our right to do so was secured by Jesus on the cross at Golgotha. I would like to wax lyrical about that, but the subject of the Cross is beyond the scope of this limited article. However this Powerpoint slide deck illustrates the point for those who want to dig a little deeper:

Coming back to our original question, where is our focus? I will suggest that most of the institutional church’s focus lies backwards. The entire ecclesiastical year focuses on things that happened in the past. We celebrate Messiah’s birth once a year (at a festival coinciding with the worship of the Roman deity Mithras) in what we call “Christmas”. But Jesus never told us to celebrate His birth! (Where did this annual jamboree originate?). We look back to “Easter” – a word that is not found in the Bible! Most Christians would be hard put to tell you where “Easter” emerged, yet would happily say it is the most important celebration of their ecclesiastical year. We look back, rightly, at the prophesies of the ministry of the Messiah and at His ultimate sacrifice (e.g. Isaiah 53 or Psalm 22). In our schematic above, we Christians tend to look from right to left – backwards. Should we instead be looking forwards – from left to right? 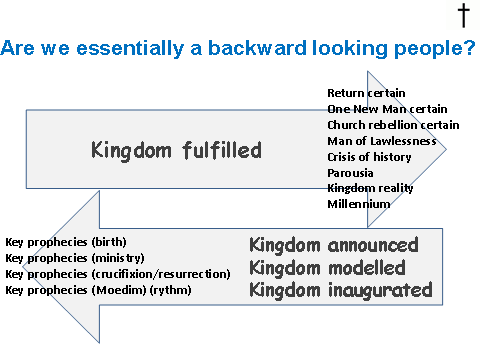 The past is instructive, but the future is more glorious still! Why is it that “church” teaching is generally so backward looking? And indeed, what does the future hold? It is rightly said that much biblical prophecy lies, still, in the future. In the schematic above, some of the glories of that future are highlighted in the “arrow” marked Kingdom Fulfilled. There are eight items highlighted, and all true believers really should have some sense of what this future entails.

Of course some “Christians” are locked-in to a so-called social gospel and really “see” the church’s primary task as to be a support mechanism, or an adjunct, to the welfare state. For these people there is essentially no future as they believe our task is “to make the world a better place”. But we have already seen that this world is passing – it is not designed to last forever. This world is in permanent and decisive enmity with its Creator God. None of this is to say that Christians should not act decisively in social contexts, yet it this only a byproduct of our status as Subjects in God’s Kingdom, which encompasses the hear and now, as well as eternity. 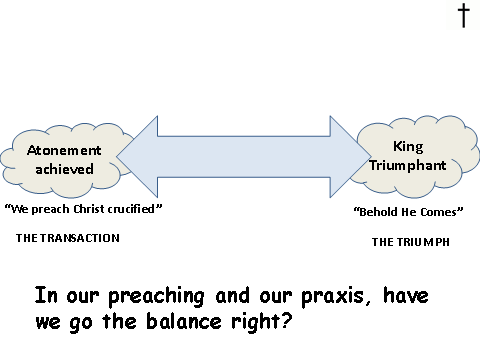 The final question simply, is one to ponder on: in our preaching and praxis – have we got the balance right? Indeed in our presentation of the Gospel, have we got the balance right? Much of the institutional “church” seeks to make itself relevant in this world. And that inevitably means dancing to the world’s tune and absorbing the world’s agendas. Yet Jesus’ blunt warning through His brother James refuses to go away. We finish with this thought, sober though it is:

You adulterous people! Do you not know that friendship with the world is enmity with God? Therefore whoever wishes to be a friend of the world makes himself an enemy of God.

Peter Sammons is commissioning editor at Christian Publications International. He is author of the books “Rebel Church” (2013) and “The Empty Promise of Godism” (2009) both of which are relevant to the key theme highlighted in this article.