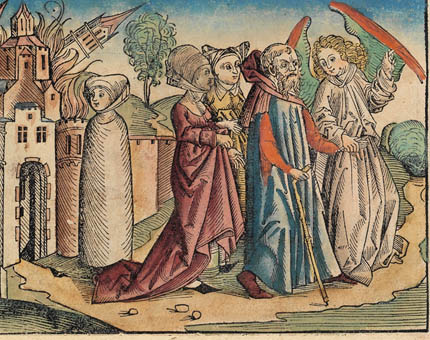 Genesis 19 seems to be a stand-alone account that may have little obvious relevance to us today. We are surely entitled to ask, however, whether it contains a message of which we need to be aware in our own day. Peter Sammons reflects.

Christians tend to be a bit hazy about the message of Lot. Genesis 19 seems, prima facie, to display to us an evident truth; that egregious rebellion against God carries an inevitable penalty. So, the people of Sodom plan, and try to carry out, a notable evil directed against God’s heavenly messengers. But they fail. And the single-minded willfulness encompassed within their planned evil brings its own swift judgment. The innocent escape, the guilty perish. Perhaps a picture (or shadow) of eternal judgment. End of story – or is it?

Like Abraham Lot was born in Ur. When his father died he was put in the care of his grandfather Terah. Both accompanied Abraham to Haran (Gen 11:27-32). Lot joined Abraham in the journey back to Canaan. By the time of the return, their flocks were too numerous for them to live together in a single locality. Abraham generously gave Lot first choice as to where to abide, and Lot chose the fertile plain of Jordan which was like “a garden of the Lord” (Gen 13:10).

Lot became increasingly involved with, and contaminated by, the corruption of the cities of the plain, and took up his residence in Sodom. So, perhaps, he became comfortable with the evil round about. A lesson here for the church?

While Lot lived in Sodom four Mesopotamian ‘kings’ (probably local chieftains) defeated the ‘kings’ of five towns in the area. In the subsequent plundering, Lot, his family and possessions were carried off as booty, or hostages. Abraham contrived to rescue Lot and recovered these prisoners and the loot (Gen 14).

Later two angelic visitors arrived (chapter 19), possibly to forewarn Lot of the impending judgment and to flee it. If so, their message does not finally need to be delivered as an evil plan is hatched by the men of Sodom, who surround Lot’s house (v.4). Their demand is to “know” the two visitors – a euphemism for rape.

Lot himself intercedes in the sense he tries to reason with the huge crowd. This fails and he offers his two daughters as substitutes. Lot’s astonishing offer has, down through the years, deeply troubled Christians and Jews alike. How can one sin assuage another? And of course this honest Bible account has been a favoured relish for the “feminist” movement in the past 50 years.

Of course Lot’s proposal was not in accordance with God’s will. We are left with no answer as to what was going through Lot’s mind. A suggestion has been made that Lot’s living amongst these plainspeople, with their terrible wicked lifestyle, had in some sense rubbed-off on him. A partial explanation? We can go no further than report this appalling case, not try to impute motives and strategies – nor even to moralize.

What we can say is that God was already mobilized to deal with Sodom and Gomorrah, and the angels’ direct intervention (v.11) shows that the end game was already afoot.

As Lot remonstrates with the baying crowd (why is it I’m reminded of Matthew 27:21-25?) their response is noteworthy. Already they had singled out Lot’s home. This foreign family, living in THEIR land, was resisting their will. Christians are strangers, living in a foreign land (1 Peter 2:11). Where we stand out against the mores of the “land” in which we live, so that “land” is violently opposed to us. That’s not an exaggeration.

Sometimes the surrounding of our “house” by the World is metaphorical. At other times it is literal. Something of this nature seems to have happened in the USA a few years back after a social media storm against the views of a certain Christian lady. Oh yes! Baying crowds will still gather to surround and enforce their will. Sadly we are well aware that in other contexts, the targeting of Christian homes and even whole villages is by no means an unknown event – we just have to think of the present Fulani atrocities against Christian villages in Nigeria.

Recently in the UK we have this: https://www1.cbn.com/cbnnews/2020/september/lets-burn-a-church-when-lgbt-activists-threaten-to-attack-uk-police-try-to-silence-pastor-instead

And in Finland this: https://adfinternational.org/news/major-free-speech-case-in-finland-2newinvestigations/

“Houses” are indeed being surrounded …….

Why is Genesis 19 in our Bibles?

“This fellow came here as an alien, and now he wants to play the judge! We’ll treat you worse than them” (NIV). As Christians stand up to be counted on a host of issues, so we are metaphorically surrounded by … social media storms, government legislation, and sometimes by militant and violent action. Says Jesus: “turn the other cheek” (Matthew 5:39). Says Paul: “Beloved, never avenge yourselves, but leave it to the wrath of God, for it is written, “Vengeance is mine, I will repay, says the Lord.” (Romans 12:19, ESV).

We note the enormous pride of the men of Sodom: “Who are these people? Who are these aliens?” They seem to be saying: we are the people of Sodom and we shall enforce our will across this society. Yet their final pride is very short lived. Within hours their city is no more and remains today an eternal byword for the final end of their pride and of God’s overruling. Today it is the pride of Babylon that seems to be the pride amongst which we live. As this world in a very real, yet also metaphorical, sense seeks to rebuild its tower of Babel, so we know that judgment and overturning will not be long delayed.

We also know that, irrespective of the warnings that God WILL unquestionably send, so mankind in his pride will defy and refuse repentance, right up to the bitter end. What fools, indeed! In Revelation 18:9-24 we see much wailing, but zero repentance. Truly, a time comes when it becomes impossible to repent and only judgment awaits. God made His Own clear comment on His decision at Sodom: Behold, this was the guilt of your sister Sodom: she and her daughters had pride, excess of food, and prosperous ease, but did not aid the poor and needy. They were haughty and did an abomination before me. So I removed them, when I saw it (Ezekiel 16:49-50). Sodom, so much like our world today, was comfortable and satisfied in its chosen way of life that necessarily entailed appalling social injustice, linked to appalling social control. And on top of that, the ever present wickedness …..

Genesis 19 reminds us that these things have ever been around us. It reminds us, also, that God is not mocked.