The Parents of God’s People 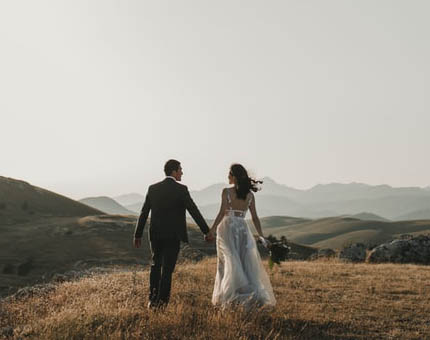 For the early part of his life, Abram (later called Abraham) lived in what we now know as Iraq. God called him out of that country to settle in the land of Canaan. In doing so, he rejected the idolatry of his formative years and risked everything in this new venture, living in tents as a nomad.

On his departure, he was accompanied by his nephew Lot, a significant staff and, most importantly, his wife Sarai. The name Sarai means ‘princess’. Years later, her name changed to Sarah which implies that she is to become the princess of many nations. A husband who regards his wife as a princess and the special person in his life is wise and very fortunate.

It is clear from the Genesis story that Abraham’s marriage to Sarah was a love-match. At the outset she is described as beautiful. (Genesis 12:14)

Modern research indicates that physically attractive people tend to earn more, likely to achieve promotion, and score higher on happiness measurements. Furthermore an attractive woman is more likely to be married to a husband who earns more than the average male. The Bible does not despise beauty, but the Apostle Peter points out the greater importance of inner beauty:

Do not let your adornment be merely outward—arranging the hair, wearing gold, or putting on fine apparel- rather let it be the hidden person of the heart, with the incorruptible beauty of a gentle and quiet spirit, which is very precious in the sight of God. (1 Peter 3: 3-4)

Although Sarah was beautiful, she was unable to conceive. As time went by, this nagging issue became more and more acute since God promised Abraham that his offspring would inherit the land and that he would be the father of many nations. (Genesis 17:5)

But the marriage, with all its ups and downs, can be regarded as successful. In her old age, Sarah at last bore a son, Isaac, thus fulfilling God’s promise. Together they led an effective and enlarging clan, which was well respected by other tribes and chieftains. Abraham and Sarah were hospitable to strangers and clearly witnessed to others about their shared faith in one God, Yahweh.

Abraham managed a successful nomadic farming enterprise and had a military group of a few hundred men to maintain security both for his clan and surrounding allies.

Sarah ran her own tent and section, and the two would collaborate on various projects, particularly in the area of hospitality as we have already noted. They loved one another and there was clearly a mutual physical attraction along with honest communication. Abraham, a powerful man, was humble in his dealings with many including his wife. They were monogamous and mutually faithful according to the customs of the time. 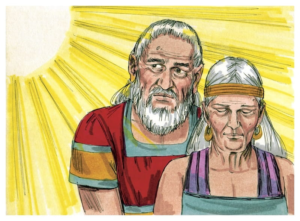 They faced hardships together and were on the whole patient and enjoyed each other’s company. This shared patience survived arguments and tough problems during their long and eventful union. Their marriage was based on God’s promise, mutual love and a desire to maintain the sacred covenant between them. When Sarah died, Abraham mourned and wept for her. (Genesis 23:2) He later married again, which suggests that he enjoyed being married, with all the companionship, confiding, and trials that monogamy brings.

However, there were a number of incidents which led to significant tensions in the relationship between these two strong characters.

The first took place when Abraham and Sarah took refuge in Egypt. On their journeying they settled for a time in the Negev which was near the borders of Egypt. As was not unusual, there was famine in the land probably due to drought. The lack of pasture pushed them westwards and caused them to attempt a stay in Egypt, which had the advantage of the River Nile, the surrounding fertile areas and the presence of storehouses. With good planning, they could withstand the effects of a prolonged famine.

Because of the size of his following, Abraham feared that he would be attacked on his arrival in Egypt. Sarah was attractive, and someone might carry her off, and in the process murder him. Some authorities state that divorce was not allowed in Egypt at that time and remarriage could only take place after the death of the spouse. In order to protect himself and probably with little thought for Sarah, Abraham introduced Sarah as his sister. In fact, this was half true since Sarah was indeed Abraham’s half-sister. They both had the same father.

Sarah was, as expected, noticed and was quickly transferred to the king of Egypt’s palace harem. This resulted in Abraham’s acquisition of much and varied livestock and many servants.

Meanwhile, Sarah remained in the harem awaiting marriage to Pharaoh.

It was customary that those chosen for marriage spent some months in the harem prior to marriage and consummation. This wait usually sorted out those who were not healthy or appropriate for promotion.

Because of Sarah, (Genesis 12:17) God intervened and inflicted diseases on Pharaoh and his household. Pharaoh realised the reason for these diseases and sent Abraham and Sarah away with even more gifts and servants. Thus Abraham rapidly increased his wealth.

The story illustrates how Abraham took the situation into his own hands rather than trust God. Sarah complied with the deception and seemingly had little choice in the matter, although she no doubt understood the dilemma that they both faced. It was only God’s timely intervention that rescued Sarah and resolved what could have been a disaster. It also shows how even a half-deception can lead God’s people into greater problems. When faced with awkward dilemmas, husband and wife need to pray together and trust God rather than use a smart but mildly dishonest ruse or conspiracy which they think may fix the problem. Deceit usually begets more deceit and subsequent complicated social knots which are difficult to untie.

Some years later, Abraham and Sarah were staying near Gaza when they faced a similar issue with the local warlord, Abimelech. As before, Abraham, because he felt threatened, told everyone that Sarah was his sister. Sarah colluded with the story. Abimelech wanted to take Sarah but, once again, God intervened. This time it was through a dream, as a consequence of which Abimelech became fearful. In due course, all the women in Abimelech’s household became infertile. Abraham’s integrity as a believer was shown up. It was of course galling for him to be accused of dishonesty as it would be for us if we as Christians are shown up to be liars. God sometimes sorts us out after compromising behaviour, but not usually as leniently as in the case of Abraham and Sarah.

The final incidents to discuss in their marriage relationship were serious sources of domestic friction.

When God promised a son to Abraham and Sarah, nothing seemed to happen. Many years passed; an ageing Sarah was eventually very doubtful and we are told that she laughed about the prospect of becoming pregnant. In the course of her mirth, Sarah referred to Abraham as her lord, or what could be translated ‘sir’, perhaps out of a reluctant esteem. (Genesis 18:12) Peter refers to this in his advice to wives and husbands, saying that they should treat each other with mutual respect. (1 Peter 3:5-7) But when it was suggested that Sarah laughed, she denied it.

All this followed a period of time when Sarah recommended, as was not unusual in those days, that her maidservant Hagar should act as a surrogate. Abraham agreed and in due course Hagar became pregnant and then began to taunt Sarah.

Sarah blamed Abraham for the situation and wanted Hagar removed. It could be that Sarah had become jealous and wondered if Abraham preferred Hagar, as Hagar might well have suggested. So Hagar left and, after an angelic encounter, returned to the household. (Genesis 16:1-15)

Some years later, Sarah at last conceived and gave birth to Isaac – the ultimate fulfilment of God’s promise. And so, unbelieving laughter turned to true joy.

Shortly afterwards, however, a further argument arose over Hagar. And on this occasion Sarah sent her away, with Abraham’s somewhat reluctant agreement. (Genesis 21:8-21)

We see similar circumstances today. A couple face a difficult situation and agree on a course of action. But when things go wrong, one blames the other. There is a loss of trust and loss of confiding in one another. Abraham and Sarah did come to a faltering resolution but, if they had an agreed to trust God in the first place, the tension between them would never have arisen.

The lessons from this are: firstly, recognise the problem early and ensure that it does not progress.

Secondly, ensure that trust and mutual confidence do not slide away. Try never to blame the other person.

One encouraging thing to learn is that, with goodwill, prayer and time, even the most divisive tensions may be resolved, as was the case with this dynamic couple.

1) What ingredients were present to make Abraham and Sarah’s relationship a happy marriage?

2) What mistakes were made and how could they have been avoided?

3) What can we learn today from this relationship?

4) How should we grieve at the death of a spouse?

Jonathan Redden worked as a consultant orthopaedic surgeon. After retirement he studied theology at Bible College. He has lectured extensively in Europe and China and has written scientific papers on arthroscopic and orthopaedic surgery.

Jonathan Redden continues this short series over the next few months.

Some free material on marriage from God’s perspective can be found here:

This book is freely available in other formats – MOBI and PRC, just visit the CPI website.