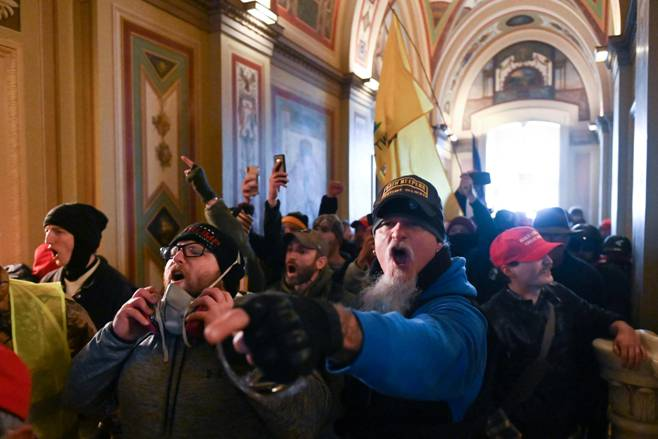 The ‘storming’ of the Capitol in Washington was a tragedy by any standards. But has the event been blown out of proportion? Jack Taylor considers.

For the Media the storming on January 06th was both a fest and a vindication. In brief, a group of rioters broke-in to the Capitol building (The Economist newspaper of January 09th described this as “thousands” (page 35). But in fact the incursion into the building was a demo of a few hundred rioters (The Economist – and numbers !!!!). Even fewer made it to the first floor, though we must await a US investigation to be sure of all the faqcts.

The make up of the mob (and that’s a fair descriptor) was broadly in UK socio-economic terms groups ‘DE’ (unskilled workers and unemployed). In photos, of the relatively few that gained entry to the building, a large number of males sported unkempt beards. I’m not sure what this means! Ironically, in the President’s own words, these people would be popularly typified as life’s “losers” …..

The rioter’s beef was, and remains, that the 2020 US election was ‘stolen’. In any nation that chooses to use fully- or semi- automated voting systems (no final human intervention in calculating results), any government ‘win’ really needs to be decisive to carry legitimacy. In the USA the new government takes over with a 4.7% advantage; automation and postal voting undoubtedly might have influenced at the margins. But the purpose of this article is not to challenge the result, merely to observe that the win was not decisive, in the sense of a 10% or more advantage.

I repeat, the purpose of this comment article is not to dispute the election result. The real question is, was the Capitol incursion as significant as the Media has been crowing?

A triumph of democracy?

In most countries (including the UK) it would be impossible to demonstrate close to the heart of government – the State simply would not allow it. In the USA this happy situation, the right to demonstrate within earshot, will no doubt change overnight.

It is surely right that peaceful political demonstrations should be allowed. This the USA has successfully provided for its people up to this point. The fact that a physical incursion to the Capitol building happened may indicate that security arrangements should be revised. This happened in London when in 1982 an unemployed painter, Michael Fagan, gained access to the Queen’s bedroom in Buckingham Palace and talked with her briefly until his presence was discovered, mercifully very quickly. Cue: very red faces at ‘Buck House’ security!

The USA may have today reached an Olof Palme moment in its security history. Sven Olof Joachim Palme was tragically shot dead in Stockholm in 1986. Palme was in the habit of walking alone in Stockholm on the basis that violence could not exist in a ‘civilised’ country like Sweden.

After his death Sweden came to the shocking conclusion that heads of state cannot walk around unguarded. The USA may now take the view that a permanent semi-lockdown in Washington DC should be de-rigeur from now on. Remember that word ‘lockdown’ is a USA police term, designed to prevent movement and normal civil discourse. Expect the new US government to crack down hard on demonstrations – almost certainly by denying them permission of location.

This is an interesting take (including a full transcript of Trump’s speech) from a Roman Catholic news outlet: https://mercatornet.com/as-i-was-saying/69327/ . Equally interesting is the Media verdict that to be a Trump voter is to be beyond the pale and semi-criminal, as this article explores: https://www.gatestoneinstitute.org/16950/erase-and-criminalize

And from a Christian Perspective?

All forms of human government are deficient by God’s standards, and there is no sense that the millennial reign of Christ will be a ‘democracy’, howsoever that word might be defined! These notes on the Millennium are useful: https://www.gotquestions.org/millennium.html

Now that the Judeo-Christian foundations on which our open pluralist democracy was built have been swept away and in many cases actively legislated against, we should not be surprised that ‘democracy’ is itself in crisis. As the Bible reminds us, “pride comes before destruction”. Perhaps ‘democracy’ itself can no longer survive. See Richard Koch and Chris Smith – “Suicide of the West” (Continuum, 2006). The undermining of Western democracy has been a long time in gestation.

We may be about to enter the era of intersection-ocracy as a news-speak agenda becomes normative in Generation Z * (why does that sound so terribly, terribly final?!) * = born after 1996.

Today’s crisis of democracy has little to do with Donald Trump and actually has an awful lot to do with Western mores and rebellion against our Creator God.

At the end of the day, bad people beget bad government, whether of left, or right. Since most people reject Jesus as Lord and now that Christianity is being progressively outlawed (I do not think this is too strong a term to use) so open pluralist democracy must wane. The sort of ‘democracy’ we might expect in future will be one where views deemed unacceptable will be ‘de-platformed’. But who gets to decide what is acceptable and what isn’t? And the extent of what is outlawed as ‘unacceptable’ will be profoundly expanded. Of that we can be sure.

That is the real crisis. But do not expect the ‘mainstream’ Media to report it. The Media is an active agent in de-platforming, in fake news and now also in fake history. We live in difficult times.

But a few hundred bearded rioters trashing a posh building really is not the big issue it has been dressed up to be.