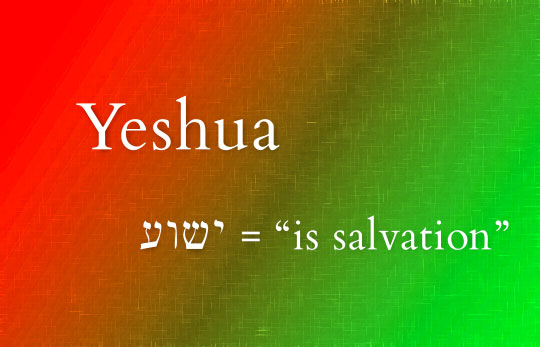 There’s one word that Jesus never heard in His life. What is it?

Uncomfortable though it may be to most Anglosphere Christians, the one word that our Lord never heard in His life was the word “Jesus”, for it is not His name. Why is this? And does it matter?

It is helpful to understand a little of the translation issues involved, which explains how we reached our anglicised “Jesus”. That is what this article seeks to do. But first we need to scotch two simple questions:

We find, in this day and age, and especially on the internet, that there are many people some with hidden agendas – and others with open agendas – who demand that we adopt their spelling-pronunciation of the Lord’s name. Inevitably they devise plausible sounding reasons why their version of the name is correct and others false. Furthermore some will accuse those who do not adopt their style as being somehow in league with the devil. This is sad. It is unsurprising that the Lord’s name, along with His ministry and ‘legacy’, are always battlegrounds. If you find yourself up-against someone who holds aggressive and divisive views on this matter then you should probably avoid them.

We have a warning about such people in 2 Timothy 2:14. We have to take this seriously, yet the Lord’s Hebrew name is surely important.

Jesus is the English rendering of the Lord’s Hebrew name. The use of a “J” in English came from the German – along with many other J’s in the English language. Yeshua is the Galilean rendering of Yeshu. The root word of Yeshu is Y-Sh-A, a verb meaning to deliver or to save. Greek has no “sh” sound and so the “sh” was rendered as ‘s’ as in the Greek Iesous. The final ‘s’ in Iesous is for the declension of the noun – a grammatical device. In the first use of the name Yeshua in the NT (Matthew 1:1), Yeshua is rendered Iesou in Greek, which is as close as Greek can come to Yeshua.

Yeshua is used twenty times in the Old Testament but is rendered “Joshua” in English as a phonetic transliteration of Yeshua. We can easily recognise this as a phonetic rendering. If the various English translations were to be totally consistent then arguably “Jesus” should be rendered as “Joshua” in the New Testament. We can, no doubt, all see all sorts of reasons why this should optimally be avoided. Indeed it is harder to see reasons why Yeshua should be so avoided in the NT! Yeshua is used:

These refer to ten men in total, including several priests, Levites, a ruler of Judah plus Joshua son of Nun (in Nehemiah 8:17).

The name Yeshu/Yeshua was common at the time of Messiah. The Hebrew root Y-Sh-A means to deliver from, to save. There is a noun, Yeshuah (pronounced the same as  the Lord’s Galilean Yeshua) that is used about 75 times in the Hebrew OT and is translated variously as Victories, Welfare, Saving Health, Deliverance, Salvation. It is transliterated in the Greek NT as Hosannah. Hosannah can be translated as Deliverance Now! Or, Salvation Now! The people were actually shouting “Yeshuah-na!” or “Hosheah-na!” from the same Hebrew root. The ‘na’ suffix is a demanding ‘now’ or ‘please’ – which sounds rude to our western minds.

The meaning of Yeshuah is deliverance rather more than salvation and where Hosanna is used in Matt 21:9, 15, Mk 11: 9-10, and John 12:13 the people were looking principally for deliverance from the Roman occupier. Their cry was right enough – they needed deliverance, but from the power of their sins rather than from the power of Rome. The right cry, but the wrong motive! The same thought was in the mind of those who called the Lord “Son of David” as Bartimeus did in Mk 10:47.

Does all this matter? The real reason why Christians refuse to use the Lord’s actual Hebrew name seems to be that they wish to ignore, or even to deny, His Jewishness. The history of the institutional church involves much anti-Semitism, and it sometimes seems there is a sub-conscious desire to sever Yeshua from His Hebraic root. This can hardly be described as a noble motive!

Today, as more and more Jewish people come to place their faith and trust in Yeshua – the Saviour of the World – so it seems likely that His Jewishness will once again become both prominent and a dividing line amongst “Christians”. Are we in danger of preaching a false, Gentilised and gentrified Jesus? Ask yourself the question, when Jesus returns, to which city will He return? The answer is strongly alluded in Acts chapter 1 verse 11.

The mount of Olives