Can Nazis Be Saved? 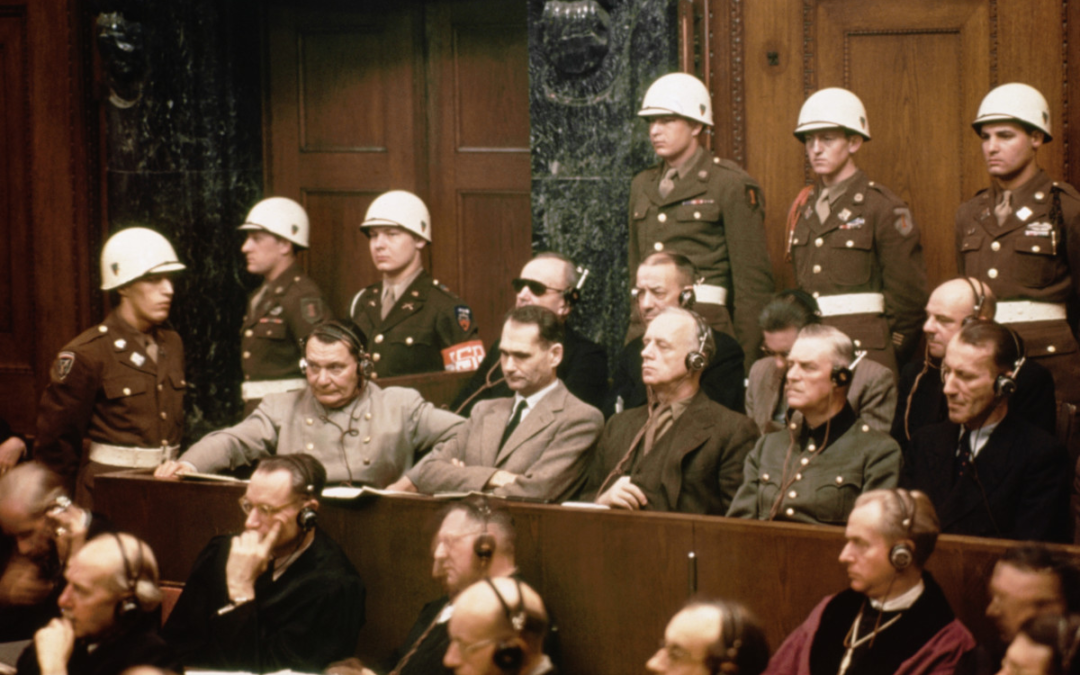 Recently two Christian publications have re-hashed the story that during the 1945-6 Nuremberg trials (picture above) certain Nazi leaders became sincere Christians. The story, in brief, is that US Army Lutheran chaplain Major Henry Gerecke so impressed these hardened men, and displayed such Godly love, that their evil hearts eventually melted and they were saved on the eve of their execution.

If so, this underscores the scandal of the gospel – that even the most reprehensible, in human terms, can yet turn – and be saved. Scandal comes from the Greek word transliterated as Skandalon and our gospel is declared by the apostle Paul to be truly a scandal (1 Corinthians 1: 23, often translated as ‘stumbling block’ but better translated as ‘scandal’). Yes, the Gospel is a scandal and potentially even the Nazi elite might be saved.

We have to treat this with considerable caution. I say caution rather than skepticism, for we all know that God’s righteousness displayed in agape (love) can indeed melt the hearts even of the most determined God-hater. But the truth of the matter is that death-bed conversions are rare. I have a buddy who told me at school that before he dies he will seek God’s forgiveness, just in case! I still know him and, in his sixties, he has still not sought that forgiveness! There must be many folk who think they can, somehow, pull the wool over God’s eyes.

As regards the top-echelon Nazis on trial at Nuremberg, perhaps it was the fear of God – surely a natural thing given their dire predicament and very obvious crimes against humanity (= crimes against God, ultimately) that made them sense the eternal reckoning lying ominously ahead. Were they truly penitent, or truly frightened? It is not for me to say, but I will certainly not peddle any story that they were indeed ‘saved’. I do not know, and nor do you.

Whilst their ‘repentance’ may indeed have been completely true and their sins completely washed away, in telling this “story” what message do we give out to all their victims? Some 30M people were likely to have been killed in Europe alone as a direct result of World Ward Two, which, let us remember, the Nazis engineered. Since many victims never had the opportunity to be reconciled to a loving and Saving God – so far as we know, in our human understanding – what message do we send out when we say, “never mind, at least God ‘saved’ some key Nazis”?!

And what about the Nazis’ most egregious victim group, the European Jews? Jewish folk can claim, with a measure of truthfulness, that Christianity has been bad news for Jews since almost day one of the ‘Christian era’. Pogroms, persecutions, forced conversions and crusades have marked the Christendom’s intersection with Jewish people. Some Christians claim either directly, or by implication, to have ‘replaced’ Israel in God’s purposes and to have appropriated Israel’s Messiah in exclusion of the Jews themselves. To add injury to injury some Christians would now add, “our God ‘saved’ elite Nazis before their deaths. Isn’t He soooo loving?”

This conclusion highly questionable. It also paints God as someone Who might “damn” Jewish people for not placing their faith in a Christianized (and de-Judaized) Messiah, whilst at the same time ‘favouring’ the Jews’ most egregious historical persecutors. As Christians we are called to make our Jewish brethren ‘jealous’ (Romans 11:11). But in truthfulness we seem to be able only to make them nauseous. How sad. I’m disappointed to see some Christian publications continue to peddle this questionable story, if only for the counter-productive, and potentially false, witness that it presents to Jewish people.

“Father, Forgive Us – A Christian Response to the Church’s Heritage of Jewish Persecution” by Fred Wright (Monarch, 2002). “The Forgotten Bride: How the Church Betrayed its Jewish Heritage” by David Lambourn (2019). Also, “Outcast Nation” by Steve Maltz, 2012 link here: https://www.sppublishing.com/outcast-nation-15-p.asp

Modern Antisemistism via Cultural Marxism has been explored by Steve Maltz in “Into the Lion’s Den”, reviewed here: https://prophecytoday.uk/study/resources/item/986-review-into-the-lions-den.html

This resource is also of interest: