Easter – An Insult to the Lord – Emmaus 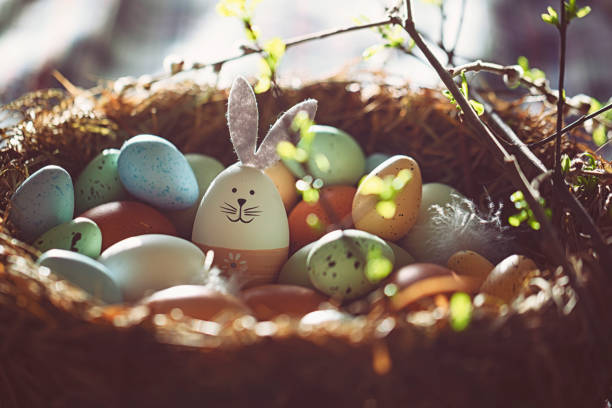 This article re-tweeted from Emmaus. Section headings and minor edits by Christian Comment.

Easter. Have you ever stopped to think about the origins of the name and traditions that surround it, and how the Lord might feel about His greatest act of love towards humanity being named after a pagan goddess? For that is the case we present to you in this letter. We invite you to put yourselves in God’s position and to see thing from His perspective.

John declared; “behold, the Lamb of God who comes to take away the sin of the world”. Jesus is described as a Passover Lamb, the Lamb of God who came to redeem mankind out of slavery, fulfilling a prophetic picture, as when God used a Passover lamb to redeem His people out of Egypt. They were protected and redeemed by the blood of the lamb. Every Passover for 2000 years before Christ pointed prophetically, to

Him. Every Passover since with the communion of bread and wine, acts as a memorial to His great act of loving sacrifice.You shall keep this as an everlasting ordinance for all generations. (Exodus 12)
Yet for some reason, the church continues to take this great act of God, and name it after a pagan fertility goddess with her religious trappings! The origin of Easter is Oestre (Germanic), which itself is rooted in Ishtar, the Babylonian fertility goddess, mother of Isis also known as the ‘queen of heaven’, to whom the pagans made raisin cakes (hot cross buns – sound familiar?) Jeremiah writes about this in chapter 44. The Israelites worshipped her as Astarte / Ashtoreth. Because of their adherence to pagan tradition and worship instead of obedience to God, they lost their inheritance in the promised land!

Ishtar’s fertility symbols, like Oestre, included rabbits and eggs. Next time you pop into the supermarket to buy chocolate eggs or rabbits as gifts, pause to reflect on the ancient tradition of pagan fertility worship you are indirectly engaging in!

Like Christmas, Easter is influenced with pagan tradition which the church has adopted and tried to ‘Christianise’ in an attempt to attract people. Does God need pagan rites to touch the human heart – we think not. In fact, the opposite is true: for God says expressly to his people; ‘do not worship Me the way the pagans worship their gods’.(Deuteronomy 12)

Tear down their altars, smash their sacred pillars, burn up their Asherah poles, cut down their idols of their gods and wipe out their names from every place. You shall not worship the Lord your God in this way. Instead, you must seek the place the Lord your God will choose….

We want to encourage you to do the same in your own life, tear down, smash and remove any reference to pagan worship among you for your God is a jealous God and an all-consuming fire.

As God’s people we should diligently cleanse our lives of anything pagan and unclean. This is partly what the Week of Unleavened Bread alludes to, removing yeast. Yeast symbolises sin. Beware of the yeast of the Pharisees. A little bit of yeast affects a whole batch of dough…..

Crucifixion is the most painful form of death. It is slow, suffocating and the pain is excruciating. It was the most barbaric form of killing and our Lord and Saviour endured it for you. He endured it out of obedience to His Father who had sent Him to die for you. It was always the plan. Jesus our Passover Lamb, died on the cross to take away our sin and redeem us and reconcile us to our Father in Heaven.
How dare we insult His memory and great act of love by naming it after a pagan goddess!

What they want to hear

Those of you who have followed our writings over the years (10 years this month!), will know we are not afraid to challenge. We have learnt the truth gets us into trouble. Jesus was crucified because He declared truth. Many of the prophets and apostles were tortured, killed or rejected from society for sharing truth.

The late David Pawson once advised us; “whatever you do teach them the truth, don’t teach them what they want to hear’. Amen to that David!
We maintain that Christians who truly follow the Lord should not be engaging in pagan traditions, however unpopular that might make them. “Blessed are you when they persecute you for righteousness sake” (Matthew 5). We are called to be a holy people for a holy God. Holy (agios gr) means set apart and different. We are not to be like the world with its pagan ways.

Easter does not appear in the scriptures,* so why does the church persist in upholding the tradition by trying to turn it into a Christian event? What does light have to do with darkness, Christ and Belial? Followers of the Lord should be keeping Passover, the week of Unleavened Bread and celebrating First Fruits, of which Christ our Lord is the first of the first fruits, resurrected from the dead having overcome death. Hallelujah!
While you ponder, consider this: Jesus was clear He would be three days and three nights in the grave, as Jonah was in the belly of the great fish! There are multiple biblical verses referring to three days and three nights.

Orthodox teaching states that Jesus was crucified on Friday (Good Friday) and resurrected early on Sunday morning (Resurrection Sunday). Scripture tells us ‘He gave up His spirit and breathed His last’ at about the ninth hour, i.e. 3pm in the afternoon. If He was resurrected early on Sunday morning then at best, that’s a time period of about 36 hours. But Jesus expressly said three days and three nights = 72 hours.

The answer to the question can be found in understanding Passover/Week of Unleavened Bread/First Fruits and God’s instructions for these events. The Week included extra Sabbaths, additional High Holy Days, extra to the weekly Sabbath (Saturday).

We wish to encourage you to go deeper in your knowledge, faith and obedience, to follow Him according to His way. If you do, you will find His word truly is a lamp to your feet and a light to your path. But this path is narrow and difficult and few find it, but the reward is eternity with the King of kings!
*If you have an old King James bible you might find the word Easter in Acts 12:4, however the New King James has corrected it and most other translations speak of Unleavened Bread, for again it was the time of Passover when Peter was being pursued.