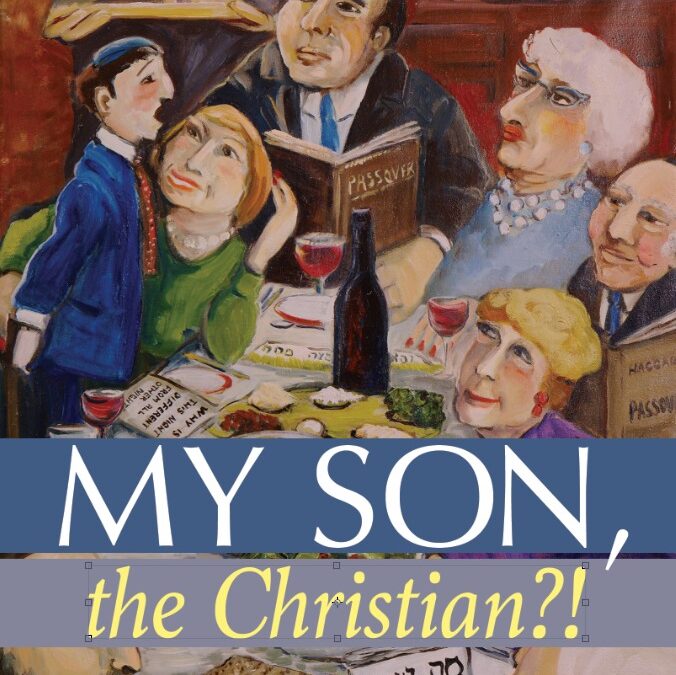 Steve Maltz was born into a typical Jewish family in the late 1950s and later came to receive Yeshua (Jesus) as his Lord and Saviour. Maltz is known today for his thirty-odd Christian teaching books and the Foundations conferences that he runs several times a year.

“My Son – the Christian?!” is a joint exercise with his mum Phyllis Maltz, and is a wonderful recounting of Steve’s evolving relationship with his family, first as a young Jew who seemed to have given up the faith (and gone non-Kosher) and then as a man explaining his life-changing decision first and foremost to his mum. And thence to the rest ….

I picked up Steve and Phyllis’s book at the 2022 CMJ UK Conference (though this is not a CMJ book) and read it quite quickly. The cover artwork is by Phyllis, who has real artistic talent and paints highly amusing and dramatic pictures. The cover image is full of humour and depicts a Jewish family at a bar mitzvah, with various relatives looking on approvingly as a 13 year old boy “does his turn”

The book is honest, humourous and biographical as it introduces us to various members of a close family, traversing a journey from Rabbinic Judaism to what might be called “completed Judaism” (that’s my phrase, its not used in the book). We readily get the picture of this very ordinary North London non-religious Jewish family finding that one of its own (the eldest son, no less) has seemingly broken the cardinal rule, not to become a “Christian”.

Steve is quite clear about how all this happened and the struggles he had to pluck up the courage to be open about his new found faith. The first people he told (excluding his wife) were his mum and his sister.

Prayer is a constant theme in the book, many answered quickly and unexpectedly, others still pending today. It’s always God’s timing, and never ours! Of course, in common with all Christians, Steve wanted to tell family and friends his new faith and relationships, but it is not easy! It’s not easy in ordinary social circumstances, but it’s much harder when seemingly one faith-system is being dropped for another.

Steve and Phyllis’ book is open about the difficulties, opposition and sometimes sheer indifference faced in living out a Christian life in a typical North London family setting. Yet Steve’s faith was certainly “catching” as later Phyllis herself received Yeshua as Lord and Saviour. In the years following, several other family members also became “completed Jews” as they received the Jewish Messiah.

I love this book with its wit, warmth and down to earth wisdom. Any reader will be amused and even delighted at this humorous, yet very touching, exploration of religious crisis, followed by resolution, and finally a peace that passes understanding.

Note: since this review was written, Phyllis was called home to be with the Lord on 13 September. Our thoughts and prayers are with the Maltz family.