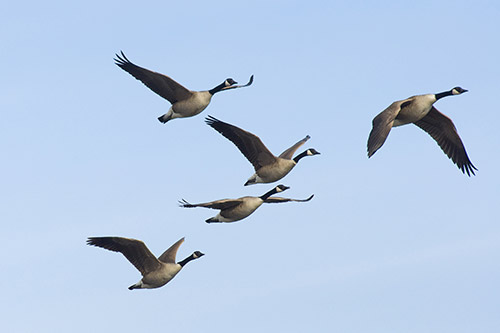 I’ve been to a couple of humanist funerals. “Wild Geese” by Mary Oliver seems to be a firm favourite at these hope-less occasions. I think we must say hope-less because, of course, humanists believe that there is no tomorrow.

Coming from Humanists, one would expect there to be no religious content or context at their funerals. And yet there it is, hidden in plain sight. They just cannot get away from it. It does seem that even Humanists obliquely parade their doubts in their anti-religion musings. Let’s critique Oliver’s short poem: Here it is for those interested: http://www.phys.unm.edu/~tw/fas/yits/archive/oliver_wildgeese.html

Let’s now vector in on those ‘religious’ bits:

‘You do not have to be good’. We can see that this is a religious comment, or even a religious shibboleth. ‘You do not have to be good’ is obviously a riposte to the Christian idea that we should in fact live good lives before our Creator God. Whilst Christianity does not demand we ‘walk on our knees’ (somewhat a misrepresentation of the Christian faith!), nevertheless Oliver’s claim remains a defiant fist-shake at her non-existent God, to Whom eventually we must all bend the knee (Philippians 2:10). Two religious comments and we’ve only just started!

‘For a hundred miles, repenting’. Well again this is clearly about Jesus’ simple command, repent and be baptised for the remission of sins. A third religious claim!

‘You only have to let the soft animal of your body’ ……. Well, that’s a clear defiance of the idea that we, Mankind, are the pinnacle of God’s created order and are not ‘animals’ before our God. Rather we are made in God’s Own image (Genesis 1:17). That’s four and we are still counting!

‘Tell me about your despair and I will tell you about mine’. I find this so sad, but it must be true for so many at a Humanist funeral. There can be nothing beyond despair. The life lamented was a meaningless one, with no past, and with no future. And with no lasting memory beyond one generation – and a fading photograph or two. Frankly, what was the point of being here at all? No wonder there is despair. But there is another despair at work as well; what if there IS, after all, a God to Whom we must answer? That must be an appalling thought to an Atheist – best push it to the back of their mind. But it won’t quite go away, will it? Five ….

Then Oliver tells us the world will go on. Christians would agree, it will go on until God chooses to roll it all up, as He will do one day (Isaiah 34:4 and Revelation 6:14) Six …..

Oliver tells us that ‘the world’ offers itself to “you” (to whom, precisely I wonder? To the living or to the dead? Oliver’s context does not make this abundantly clear). But how interesting that her motif of ‘the world’ is offered. In Biblical terms “the world” is always a metaphor for all those things opposed to God’s purposes (1 John 2:15-18). So Oliver can offer, once again, only defiance of her non-existing God! Seven ….

And finally, ‘the family of things’. This is surely evolutionist dogma, which must be declared as ANOther religious belief. Evolution is as much a religion as any other that I know. A religion dressed up as a pseudo-science. Eight …..

So that’s at least eight direct religious allusions in this so-called Humanist comfort-break. Not ultimately comforting. And offering (it might be argued) the broken world-view of a religion (Humanism) that is never able to find ultimate peace in this Created world. A comfort-break only.

When I next attend a humanist funeral I suspect these will be my musings, again, as this ultimately hope-less poem is read out as a sort of prayer to …….. to no one!