PALESTINE – PRECISELY WHAT DO YOU MEAN? 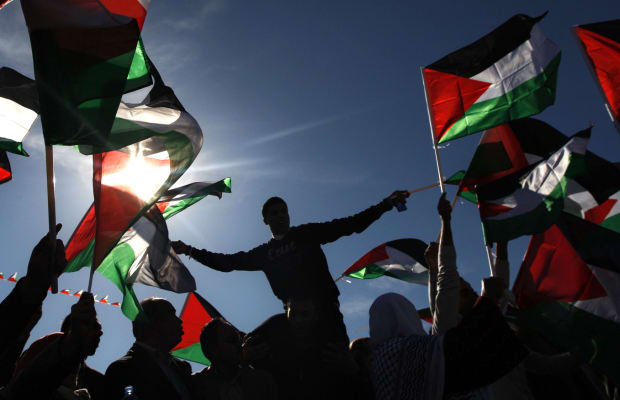 PALESTINE – PRECISELY WHAT DO YOU MEAN?

A new USA government and a new approach to ‘Palestine’. Jack Taylor comments:

The name ‘Palestine’ derives from the Greek Palaestina, which comes from the Hebrew Pleshet (“Land of the Philistines”). It refers to a small coastal area to the north-east of Egypt, historically called Philista. For the past 150 years the term ‘Palestine’ has been used by biblical historians as a sort of shorthand to describe the area covering Judaea, Samaria and Galilee. We need to be wary in using the term today, for it has become so heavily politicised as to render its scholarly derivation virtually meaningless.

It is helpful to understand that the invention of the term Syria Palaestina by the Romans was part of a deliberate policy following the Roman-Jewish war of AD66-70 (which led to the complete defeat of Judaea) to extinguish Jewish national aspirations and to wipe the memory of Judaea, Samaria and Galilee from that region.

For Rome to re-name the region Syria Palaestina was a calculated double insult: it was designed to erase Jewish connections from the local geography (in what today we might refer to as ethnic cleansing) whilst elevating the name and memory of Israel’s ancient enemies – the Philistines. The Romans used the term Syria Palaestina to describe the southern third of their province of Syria, including the former Judaea. The modern term ‘Palestine’ was not known in Jesus’ day.

The name ‘Palestine’ was revived by the British as an official title for the territory from the river Jordan westwards to the Mediterranean coast after the First World War, an area administered at that time by Britain on behalf of the League of Nations. The British could hardly call the area Syria as (a) it was not Syria and (b) Syria was administered at that time by France, also mandated by the League of Nations. In choosing the term ‘Palestine’ The League of Nations simply reflected a classicist understanding of that region. The classicists had always seen the region either as “The Holy Land” or as “Palestine” following their classical mindset.

The classicists* dominated the League of Nations. Classicism was, in the nineteenth and early twentieth centuries, the dominant educational trophy. Virtually all scholars, politicians and higher clergy had a classical education. We tend to forget this today. The classicists then (as today?) saw the entire region through the prism of the Greek – and later Roman – Empires. They called the middle east the Gaeco-Roman world.

(* The modern British equivalent of classical tertiary education is surely ‘PPE’ – politics, philosophy and economics. This is another generalist educational attainment arguably unfitted to the needs of modern complex government. Yet most senior British politicians are PPE graduates!)

The area referred to as ‘Palestine’ today generally extends from the Mediterranean Sea on the west to the River Jordan on the east and from the international border of Israel/Lebanon in the north to Gaza in the south. The territory was occupied in early Biblical times by the kingdoms of Israel and Judah, and in the time of Christ comprised the Roman provinces of Judaea, Samaria and Galilee.

In today’s world the term ‘Palestine’ has overwhelmingly political overtones. It is a surprise to many when they understand that there has never been a country called ‘Palestine’. This is a hugely inconvenient fact for some!

For the Christian, are there spiritual overtones to the revival, and now dominance, of the term ‘Palestine’, given that Phlistia was such a thorn in the side of Israel in Biblical times? You do not have to be a genius to note that the modern concept of ‘Palestine’ is also a thorn in the side of modern Israel. More than that, the aspirations of Palestine (and it must be added, of the United Nations) under any of the so-called ‘peace plans’ involves either the evisceration of Israel, or its active dismemberment as a contiguous (and therefore defendable) state.

Whenever it comes to Israel, the policy of the international community might be described as “murder in mind ….” Am I being unfair? Readers must decide!

Are there spiritual overtones in the modern Arabic terms variously and phonetically rendered ‘filasteen’, ‘filisteen’, or ‘philistine’ in describing those who identity as “Palestinians”? A quick Google search on the term shows that it is a dominant moniker in the thinking of many in that region.

This quick Bible survey indicates some challenging questions for all Christians, given the dominant place of Israel in the world’s affairs.

Many writers have explored Israel’s place in God’s purposes, and indeed in end time scenarios. Far too many to list! But David Pawson’s “Israel in the New Testament” is an excellent starting point for the serious Christian. (And if you’re not a serious Christian, can you really describe yourself as a Christian at all?!). For those who want to hear him, there is a free video series on YouTube: https://www.youtube.com/watch?v=0jyk7FjlGKc

Israel is a subject that will not go away. Both Christians and non-Christians really should seek to understand God’s overruling in this. To ignore the matter is really to put one’s head firmly in the sand.

Meantime the world at large is determined to create a Palestinian state: