Review – We are the Prey 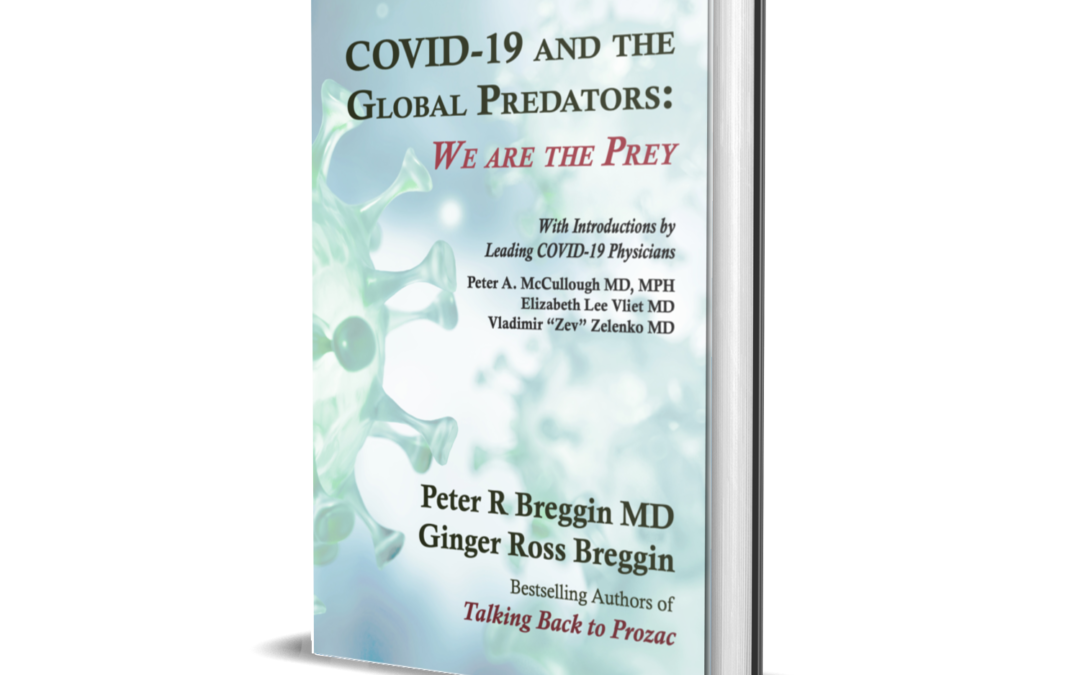 Covid-19 and the Global Predators – We are the Prey

Peter and Ginger Breggin’s“Covid-19 and the Global Predators – We are the Prey” claims to reveal the true story of the pandemic, based on extensive and painstaking research, all of which is thoroughly documented and referenced.  Given the salient importance of this event in recent world history and the profound impact it may have on the future of human society, if the general thrust of their thesis is indeed correct, this work should surely be required reading.

The re-engineering of our modern world triggered by Covid-19 is of profound prophetic significance and its future consequences are likely to be especially impactful on followers of Jesus.  Furthermore, the book’s perspective is to some extent theological; the authors explain the crisis and its handling in terms of a Marxist, globalist attack on Judeo-Christian values, which they defend as essential for preserving the freedoms of the Western world and the USA in particular.  (Peter, a Jewish believer in God, is the primary author, assisted by his Christian wife Ginger.)

Before examining the book’s extraordinary claims, it is important to briefly summarise Peter Breggin’sparticular credentials for writing it, as they lend significant weight to the credibility of his testimony against the medical establishment and big pharma in particular.  To quote from his bio at https://breggin.com/brief-bio/:

“Peter R. Breggin MD is a Harvard-trained psychiatrist and former Consultant at NIMH who has been called “The Conscience of Psychiatry” for his many decades of successful efforts to reform the mental health field…. Dr. Breggin has authored dozens of scientific articles and more than twenty books, including medical books and the bestsellers Toxic Psychiatry and Talking Back to Prozac. …. As a medical-legal expert, Dr. Breggin has unprecedented and unique knowledge about how the pharmaceutical industry too often commits fraud in researching and marketing psychiatric drugs. He has testified many times in malpractice, product liability and criminal cases, often in relation to adverse drug effects and more occasionally electroshock and psychosurgery.”

Assuming We are the Prey is generally accurate, this must be one of the most extreme cases of truth being stranger than fiction.  Yet many of the author’s claims are coming to light more widely (although presented more cautiously) in parts of the media which are not completely sold out to the globalist agenda.  In this context, it is worth reminding British readers of the exceptional disconnect concerning Brexit between ordinary people and the pro-EU mainstream political establishment and much of the media, as well as the extraordinary extent to which the latter promoted “project fear”. This perspective may be helpful when considering ‘We are the Prey’, in which Breggin extensively documents deliberate attempts by governments to exaggerate the scale of the crisis – intentionally using fear to ensure compliance with lockdowns, mask-wearing and other measures.

‘We are the Prey’ starts by examining at length the extensive collaboration for many years between Anthony Fauci and other US scientists with Chinese scientists working for the country’s leading biological warfare research lab in Wuhan.  Specifically, Fauci funded (even in outright defiance of presidents Obama and Trump) “gain-of-function” research, the goal of which is to engineer naturally occurring animal viruses into bio-weapons to attack human beings.  However, the claimed justification that such research is needed in order to develop vaccines to protect us from future biological warfare attacks is convincingly dismantled by the Breggins.  Their arguments include their conclusion that the chances of Covid-19 having arisen naturally are infinitesimally small, whereas there are numerous documented cases of laboratory leaks of engineered pathogens.  Thus the danger to humanity is not from a hypothetical risk found in nature, but from the development and release of man-made viruses.

The story gets worse when it comes to vaccines, starting with the suppression by the medical establishment of pre-existing effective treatments for Covid-19 in its early stages.  It is argued that this was deliberately done for profit because the US licencing regulations would have been forced to refuse the emergency authorisation of the MRNA experimental vaccines if any alternative existing treatment were known to be available.

Significant evidence is then presented which calls into questionofficial vaccine narratives, examining for example the abandoned attempts to develop vaccines against SARS-CoV-1 (an earlier, similar virus to Covid-19), the under-reporting of adverse drug reactions, the high level of reported deaths attributed to the vaccines (already several thousand in the USA) and more.  The other side of the equation has been the tendency to exaggerate Covid deaths by recording it as the cause of death for anyone dying with the disease, whereas 94% of such fatalities among the elderly in the USA were for people with at least 2.5 co-morbidities – that is, pre-existing potentially lethal conditions such as cancer.

The book’s title, referring to the general public as prey for the globalist predators, pithily summarises its contention that both the release of Covid-19 and the response to it were prepared and planned.

Suspiciously, Fauci, Bill Gates (who has a financial interest in 7 different Covid vaccines, including Pfizer, Moderna and Astra-Zeneca) and various other billionaire globalists had been predicting just such a pandemic several years in advance, even giving clues to its timing and, once Covid-19 arrived, their vaccines were already practically ready and then rushed through FDA emergency authorisation in record time.

The weight of circumstantial evidence supporting this conspiracy theory is such that the book concludes with a 36-page timeline recording specific events and statements which collectively lend it significant credence.  This is presented as a “living document”, meaning that additional material is continually being added right up to the time of publication; in practice, this means that when someone orders the book, they are immediately sent a link to download a pdf of the latest version.  In their urgency to get the book out, the Bregginshave made its digital content free to readers outside the USA.  This review is based on the manuscript as of 24th May 2021.

The authors reveal their personal shock at discovering how what initially appeared to be an investigation into the specific field of medical mal-practice relentlessly led their enquiries into an ever more complex web of interrelated events.

Readers should not therefore be surprised to find the book exploring themes such as “The Great Reset” and the globalist agenda, as well as evidence for widespread interference with the most recent US election.  (Regarding thesuccessful election of Jo Biden, John Kerry actually stated “We’ve done the Great Reset”.) Finally, as a specialist in the field of psychiatry, Breggin offers some reflections on the words, actions and apparent motives of the globalist predators, whom he describes as “sociopaths”.

It is worth mentioning the contribution of three eminent physicians to the book’s forward.  These include medics who have saved numerous lives by treating Covid in its early stages with pre-existing, safe, conventional medicines.  Their comments on the political take-over of the medical establishment are particularly damning, with one of them describing it as a “crime against humanity”.  The book includes references to resources for those who might wish to seek out the aforementioned treatments and to physicians who are willing to go against the tide and prescribe them, although most of these are in the USA.

‘We are the Prey’ is a book which will fiercely divide readers between those who dismiss it as a monstruous conspiracy theory, and those who find it confirms their worst suspicions.  Regardless of where one stands, the evidence presented by the Breggins deserves to be openly debated rather than being cancelled by mainstream media and social media platforms.

Available free in digital format for readers outside the USA on https://www.wearetheprey.com/