JESUS AND THE GIFT OF TONGUES 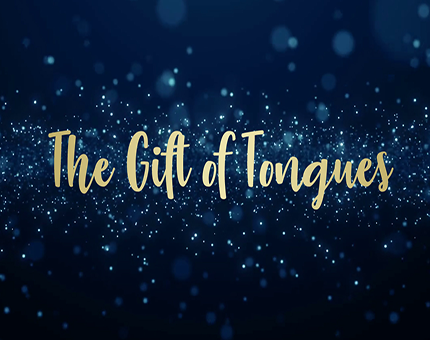 I can’t think of any other spiritual gift from the several lists in scripture, except perhaps healing, that excites such controversy and confusion within the church. This I cannot understand, except that the devil opposes fiercely Christians stepping into these gifts. He knows how dangerous this would be to his dominion. There is mixed teaching on this subject, so tragically these gifts have polarised and divided the body of Christ as much as they have been a blessing and a resource. Some Pentecostal churches assert that the gift of tongues is the only marker of being baptised in the Spirit. Other reformed groups are wary because of their ‘cessationist’ theology. Let’s step back for a minute and investigate.

Did Jesus speak in tongues?

As in any area of discipleship and ministry we look first to Jesus. We clearly see every other spiritual gift in His ministry but tongues; this is a moot point. In Hebrews we are given another insight into Jesus’ prayer life and some suggest that he is described praying in tongues here:

During the days of Jesus’ life on earth, he offered up prayers and petitions with fervent cries and tears to the one who could save him from death, and he was heard because of his reverent submission. (Hebrews 5 v7)

Others posit that we need the gift of tongues to cleanse thoughts and lies in our minds because we are so earthbound. Jesus was the very Son of God Who walked in total clarity and obedience (John 5 v19). Interestingly, Rabbinic tradition holds that the high priest would speak in tongues on atonement day when he was in the Holy of Holies. Jesus is now our faithful high priest! (Heb 2 v17) There is also a prophecy in Isaiah that seems to describe tongues. (Is 28 v11 CEV) After Pentecost we find the apostles clearly speaking in tongues (Acts 2) and Paul makes some extraordinary claims.

Paul is a huge advocate for the Godly use of this gift,

pray in the Spirit on all occasions with all kinds of prayers and requests. (Eph 6 v18a)

What’s all the fuss about?

What does it matter one way or the other? Can’t we take it or leave it, being more or less neutral? Well, if God has given us a gift it’s because He knows we will need it. Wouldn’t it be ridiculous if one army went into battle with another without any automatic weapons? ‘We don’t like them’, they insist, ‘we prefer swords and spears’! Does this mean the enemy will lay down all their machine guns and rocket launchers? Is it possible to enter the fullness of what God has for us while snubbing some of the gifts He wants to give us? It’s not just about us. What about prisoners who need rescuing?

Is it a badge of honour?

As with any spiritual gift its public purpose is mutual edification not personal grandstanding. The Corinthian church enjoyed many ecstatic times in the Spirit, but Paul still wrote to them as unspiritual people. Thankfully God does not wait until we are mature before He blesses us with gifts. Neither does He snatch them back when we use them in immature and even sinful ways. (Romans 11 v29)

Just because someone prays in tongues does not necessarily make them a spiritual person. They may say all sorts of worldly things as well. Neither does the absence of tongues make someone else unspiritual. Tongues are a grace gift to be carried humbly and lightly; not imposed loudly on people who don’t want them. However, I relish prayer times with likeminded people who pray and sing in tongues freely.This does not make me any better or worse than other Christians who might prefer only to do so when alone and private, or not at all.

The benefits of the gift of tongues

Personally, the gift of tongues has been transformative in my discipleship. I would never want to go back to not having the gift. When I don’t know what to pray I use tongues, when driving and concentrating on the road I speak in tongues (this doesn’t affect my cognitive ability one iota). And when under pressure I speak in tongues, if only in my mind. I have never looked back since receiving this gift and regularly ask God for more words and languages to express the mysteries of the Spirit (1 Cor 14 v2). I have at least two different languages; perhaps one is more effective in praying for certain things and vice versa. I have even found revelation to understand some difficult passages from the Bible when I pray in tongues. What an edifying and strengthening gift.

Picture fruit cake mixture in a large mixing bowl. The goodies: the raisons, nuts and cherries sink to the bottom if they are left alone. This is rather like our spirits; if we are not actively stirring up our spiritual gifts in everyday life they slowly sink to the bottom and are hidden (2 Tim 1 v6). It might be in corporate worship the next Sunday they surge up to the surface again. But we are not called to that kind of ‘subsistence Christianity’. Corporate worship is supposed to be the icing on the cake, not what we survive on! We’re called to alertness in every situation (1 Peter 3 v15), and to flow in the gifts even in spiritually artic conditions.

So back to the cake mixture.The gift of tongues is the wooden spoon which stirs up the cake mixture bringing all the ‘goodies’ to the surface again before it goes in the oven.It’s a base gift which often stirs up and releases the other gifts of the Spirit.

Imagine yourself on the M25 at rush hour. There is gridlock and your heart sinks as you predict how long it will be before you get home. The M25 represents the world where Christianity is opposed on so many sides and even actively suppressed. A giant hydraulic arm swings across and lifts your car up and out of the traffic. You are carried expertly above all the other cars safely towards your destination. The arm speaks of living in the Spirit, ruling over circumstances and not being locked into them. The gift of tongues is a wonderful aid to living in the Spirit (Gal 5 v25). Who wouldn’t want this spiritual fast-track and VIP lane? Wouldn’t it be madness to stay stewing in rush hour traffic when there is a better way?! Just because other Christians are stuck, it doesn’t mean we have to be too!

God will not give you a ‘false’ gift that will damage you. He is far more vigilant to lead us than the devil is cunning to deceive us. We may need to repent for judging spiritual matters before we understood them; I definitely did. Whatever our churchmanship and the teachings we have received, we must all come back to our good Father with empty hands and open hearts. He delights to give us good gifts that will edify us – and others. Why not ask for this beautiful gift today? Be specific, it’s His good pleasure to give us the kingdom. (Luke 12 v32b)

I want you to enjoy the huge blessing that is this gift of tongues. I spent too many years as a Christian without it.

Daniel Holland is a UK missionary with Through Faith Missions. He wrote “Through The Tunnel – Free at Last” published by PUSH Publishing, as his personal testimony. His second book “Prophetic Evangelism – Kingdom Exploits in the Risk Zone” has just been re-published Christian Publications International. https://christian-publications-int.com/PropheticEvangelism.html