It would be funny if… 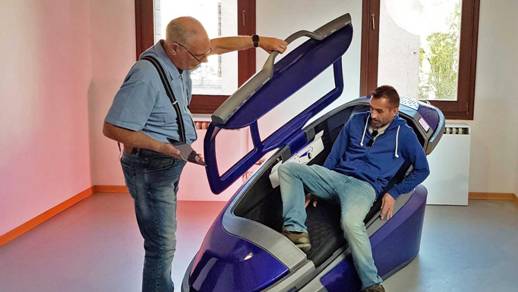 it was not so profoundly sad. Jack Taylor comments.

The illustration above is the prototype ‘suicide pod’. Should any home be without one?!
https://www.thetimes.co.uk/article/dr-death-campaigner-targets-30-second-suicide-pod-at-switzerland-lnhpfjtbd

We reported a few months ago on “kind killers” and their crazy (evil?) mentality: https://christiancomment.org/2020/11/02/kind-killers/ As we write this comment piece, the UKL’s House of Lords is simultaneously considering legalising something called “assisted suicide”. Well, we know where that one is headed, sadly!

Mankind thinks he can become a sort of “god” of his own design. He can kill the unborn and now he can kill the elderly, the infirm, or just the plain unhappy. The Bible, particularly Revelation, seems to point towards such an eventuality. Man wants to be ‘god’ – surely that’s what “the Fall” was always about. Man wants to become “homo” (man) “deus” (god). Pictorially we can think of it like this: 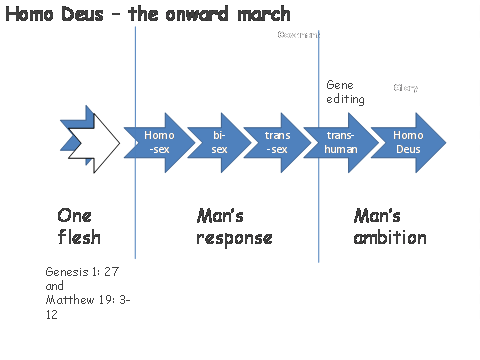 Man has always argued against God’s good and perfect design. And mankind has an ambition, to become his own “god”, and in essence to worship himself. In the UK since 1967 things have ‘evolved’ over time (and perhaps in this case the word ‘evolution’ is correct). A particularly radical UK government in 1967 ‘legalised’ various things, which seemed to mark the beginning of the progressive ‘paganization’ of the UK. All the terms mentioned in our schematic above are now in commong parlance and we are moving rapidly to developing beyond ‘human’ (hence ‘transhuman’). But homodeus is also openly being spoken about. Just Google it. 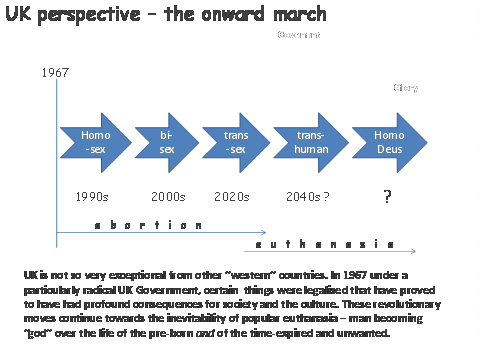 We live very much in a consumer society. We think we can control checking-in, via the blunt instrument of abortion. Mankind will ‘control’ entry into this world, and to hell with the consequences! So today we have a westernized “checking-in” process, just like checking-in to an hotel, in fact! And right now we are discussing legalizing the “checking-out” process as well. Again, to hell with the consequnces.

We must not be overly alarmed by this. As Jesus said “lift up your heads” (Luke 21:28). Our daily prayer must surely be Revelation 22:20.